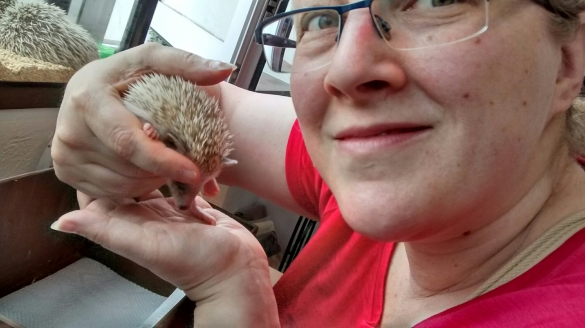 When we were planning this trip to Japan, my friend Lori mentioned Hedgehog Cafe Harry in Tokyo. And yep, it’s like a cat cafe, but with hedgehogs. So, of course I made a reservation.

Turns out you don’t really need to do that, especially if you go early in the day on a weekday (maybe it’s different evenings and weekends). Our reservation was for noon, for an hour. There was a line when we got there, a few minutes early, but only one other person had a reservation aside from Jason & me. We 3 got in first, and then everyone else went in after. The place probably only holds 12-15 people at a time, so I guess if there were more than that, people would have to wait until someone leaves before they go in. Also, we reserved an hour, so we were committed to paying for that much time. But people who walked in just paid by 30 minute increments.

Here’s how it works: There are a bunch of terrariums around with hedgehogs in them. You point to the one you want to hold, and they put it in a box (about the size of a show box, but metal), and you take it back to your assigned seat. The staff will also teach you how to pick up a hedgehog, if you like. And you can buy a tiny bowl of treats to feed them. 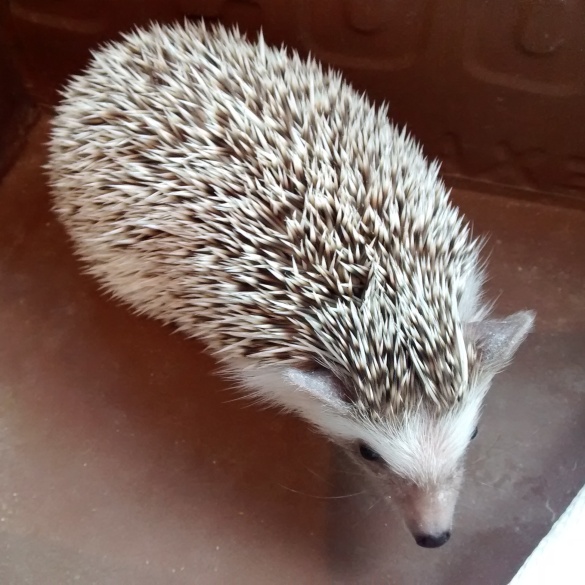 You can also bring your hedgehog back and get a different one at any time, which was lucky for me. Jason’s first hedgehog seemed active, but pretty calm. His second one fell asleep in his hands. Mine were a little more temperamental.

I tried to get an active one, thinking it would be playful. The first one seemed playful, and then it bit the heel of my hand. For the second one I chose one that was sleeping, thinking it would be calmer, but apparently waking it up made it hyper and cranky. The next one was way too big for me to pick up. So I asked a seasoned staff member for a small one. 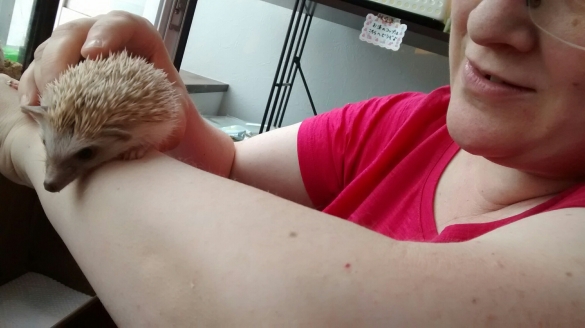 He selected the small, cute, blonde hedgehog you see on my arm in the photo above (also in the first photo). Shortly after that was taken, it pooped in my hand. Then it pooped again and again – 5 or 6 times. I was holding him over the box (which was lined with a paper towel), so he was no longer pooping directly on me, but I felt I couldn’t put him down in the box because there was so much poop in there! I had to get Jason to call the guy over. He took the hedgehog and the box away, put a fresh paper towel down, and brought the same little creature back to me. The hedgehog immediately peed all over his fresh, new paper towel. I brought him back and told them, “No, he’s too scared.” They apologized profusely, of course.

I can’t remember how I picked the next hedgehog, but that was the one I stuck with for the rest of the time. He was very active and when I picked him up, he basically wanted to crawl all over my arms.

Despite all that mess and the pain of trying to hold a squirming creature covered in sharp quills, it was pretty fantastic. However, I’m not sure we needed a whole hour. 30 minutes might have been plenty.