Today we went on a day trip to Nikko, visiting an amazing shrine and an odd Japanese theme park. Here are some highlights, followed by the photos I posted to Instagram that day:

When we were planning this trip, we asked several people for recommendations of things to do. One of the people I asked was Yuji Haraguchi, proprietor of Yuji Ramen and Okonomi (and soon Osakana). He suggested a couple places, including Nikko – a city near Tokyo, with beautiful mountains and temples.

So I booked a day tour to Nikko. This turned out not to be the best way to see the area, for two reasons. The first was that, after several weeks of being completely on our own – including 4 days of hiking through the mountains and visiting shrines and temples on our own schedules, we didn’t have a lot of patience for being led around by a tour guide.

Our tour guide was lovely and she did provide some interesting background information. And the temple – Nikko Toshogu Shrine – was absolutely stunning, one of the most impressive and beautiful temples we saw in Japan. But it was too rushed and too much on a schedule. Our bus passed by an amazing bridge and as we looked out the window at it, our guide apologized that we didn’t have time to stop and see it, even though it was one of the most popular sights in Nikko. When we arrived at the temple, there was a concert taking place just inside the gate. Normally we would have seized this opportunity to enjoy this unexpected addition to the experience, but instead we were shuffled into the temple to begin the tour. It wasn’t long before we wandered off to look at things on our own.

The second weird aspect was that the tour was half about this temple and the other half was a visit to Edo Wonderland. Jason dubbed it “Japanese Colonial Williamsburg” (and we’ve since seen other reviews that described it this way). So, it’s a theme park that’s designed to look like an Edo-era village, with all these people in period costumes. And there are also ninjas. It was kind of interesting to see, and there were some short performances that we watched, but overall I think I would have rather spent more time in Nikko, enjoying the natural beauty of the area.

We took a train back to Tokyo and went to Don Quijote – a Japanese discount store that sells all kinds of things, and many of its branches are open 24 hours. We bought a bunch candy and other weird things to bring home.

Back in our neighborhood we were looking for a late-night meal, and I was sort of feeling like ramen. The top nearby result in Yelp was a ramen shop called Fukki which turned out to be a place that I went to last year! You buy a ticket at a machine in the front of the small shop, and then you sit at the counter and they make up the food for you. A guy ran up to help us order, and I’m pretty sure the same guy helped me last time too.

When we finished eating, we were the last ones there and they were closing up. I told the guy (I didn’t get his name!) that I had been there a year ago and then we had a nice chat. He asked how the trip has been, and if it’s been difficult to find people who can speak English. I told him that when we’ve met people who speak English, they’re very happy to get a chance to use their skills. And even when we haven’t it’s been pretty easy. He said that Japanese people think English is cool (we’ve observed this on many t-shirts), but they don’t generally speak it very well. He’s about to go to Guam with his girlfriend, and he’s nervous about it because he’s going to have to do all the talking. His English seemed pretty good to me! In any case, he feels that Japanese people will have to learn more English before the Olympics in 2020. Well, they’ve got 4 years to work on it!

Walking tally: Fitbit says I walked 19.5k steps today, which is a little over 8 miles. That’s a total of over 183.5 miles of walking for the trip so far.

And here are the photos I posted to Instagram on this day: 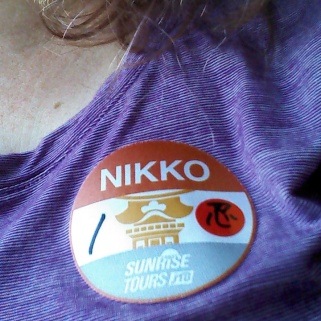 My sticker for the Nikko tour 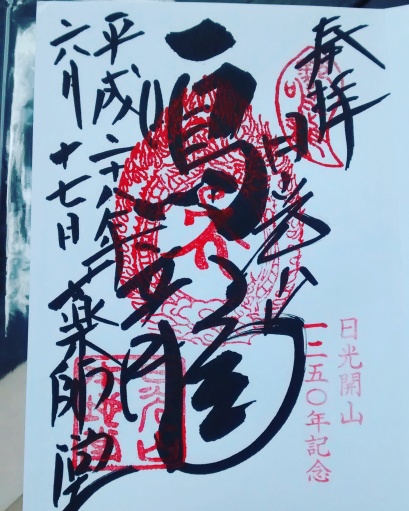 And there are a lot more photos from this day in this set on flickr (with photos from June 15th & 17th also).